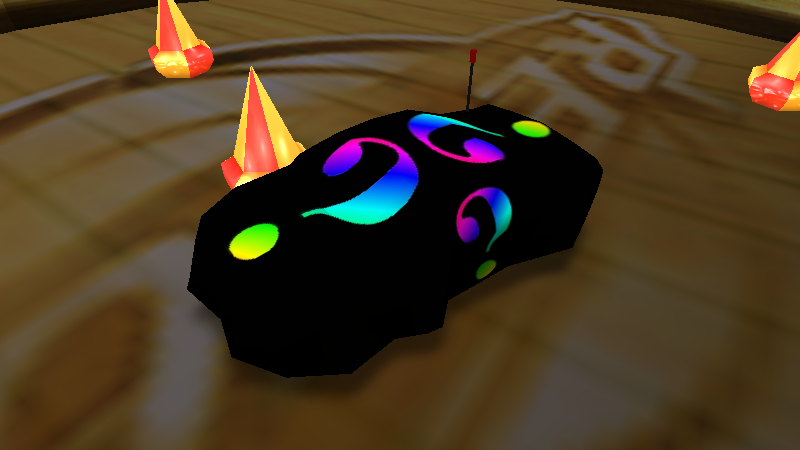 This pack will replace stock content: This is a pack of skins for use with the Mystery car. As the car is relatively boring, I figured I would spice things up by providing a touch of variety with car skins. Provided with the skins is also a replacement body file with remapped UV so the entire car takes to a colour change as defined by the provided skins and a replacement stock mipmap file is provided as an improvement over the original.

Mind; Mystery is not a CPUselectable car (despite my best efforts) so you won't be seeing this outside of online play, but in multiplayer games where you don't have a particular car your opponents will be more distinguishable. The five additional skins provided: Notes: How to install
Copy directory q from archive to your game's cars directory.

Editing white with pure black skin
Because of how this game works, pure black renders as transparent since black is a magic colour. If when editing this, in GIMP open hue/saturation tool and dial down the brightness by -1 to return at a state where black is pure for greyscale layer mask. After applying the layer mask, boost the brightness back up to 1 to bring back pure white with transparent question mark, then make your changes using another layer underneath.

Notes about optional batch script
A second download link is included in the bottom for an optional batch script, for people who want a quick and easy way to apply or remove these changes without futzing about in their game directory. To use, rather than copying q directly into the game's cars, extract from archive the qVariety directory somewhere memorable.

After choosing to download the batch script, put it inside of qVariety. Then execute it and it should just work. Some things of note to ensure it just works: Download
Optional installation script
Last edited by ElectricBee on Sun Mar 31, 2019 6:00 pm, edited 15 times in total.
I do, not for God or country, because dead men profess no faith, neither do they have a home.
Previously-active member of Re-Volt Live. Contributor of silly things. Smart enough to be dangerous.
Top

Uh, actually I forgot the download link in my haste. Sorry.

Edit: Fixing stuff.
Fixed stiff.
I do, not for God or country, because dead men profess no faith, neither do they have a home.
Previously-active member of Re-Volt Live. Contributor of silly things. Smart enough to be dangerous.
Top

It would be nice to see some pictures of the mod in this thread.
I guess a lot of people would like to see what they will install, before downloading.
My Re-Volt creations: Skins | Pemto Pack Project | Cars | Tracks
Top
Post Reply
3 posts • Page 1 of 1