Improved Reverse Support:
For track makers, the ability to customize their tracks for reverse variants has vastly improved. All supported levels files and a few level graphics can now have reverse variants placed in the "reversed" or "custom/reversed" folder.

Below is a list of newly supported files that can have reverse variants: If one of these files is not present in the "reversed" or "custom/reversed" folder, the game will fall back to the forward version of the file. Note that fallback support is only provided for newly added formats. There is no fallback functionality for file formats that were already supported. Specifically, a reverse variant must be provided for these formats: All supported <level>.inf keywords can be customized for reverse mode by placing a "reversed/<level>.inf". The only exceptions are STARTPOS, STARTROT and STARTGRID which must use their REV variants.

Shader Updates:
The shader code has been restructured to generate more permutations and avoid dynamic branching where possible. This should greatly improve performance. It now supports a maximum of 8 Lights and 3 ShadowBoxes per mesh. Further, repetitive error messages on shader compilation failure is now avoided.

This release also brings support for new OpenGL functionality, taking advantage of newer hardware: Note: Support for these features can be verified from the Video Info section in re-volt.log.

Improved translucency sorting: Special effects like sparks, skidmarks, dust and smoke are handled better by the shader renderer. For some background, see the post at [RVGL Shader version] Translucent faces issue. This can be slightly more CPU intensive. A new key SortLevel has been added to rvgl.ini to switch between the new sorting algorithm and the old, simplistic sorting scheme.

Android Updates: Basque Language:
Support for the Basque language has been added, thanks to translation provided by Urtzi of Game Erauntsia.

So, what's up with the greyed out video settings in this version?:

These entries are no settings, they're just for displaying purposes to see which video device and renderer is used.
It was introduced in this version: viewtopic.php?f=8&t=171

Heads up for those of you on Windows 10: You might run into this when you try to launch the installer. 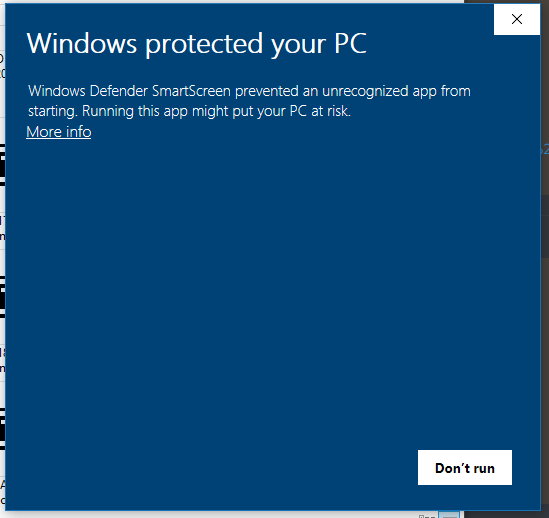 I was able to get around it by turning off Windows Defender, but I figured I should share it in case anyone runs into the same error and panics about it.
Top

Dave-o-rama wrote: ↑
Sun Jul 22, 2018 2:10 pm
I was able to get around it by turning off Windows Defender, but I figured I should share it in case anyone runs into the same error and panics about it.

I think you can also click on More Info and then another button appears to let you run it.
Maybe it's time to switch to linux

Marv wrote: ↑
Mon Jul 23, 2018 8:55 am
I think you can also click on More Info and then another button appears to let you run it.
Maybe it's time to switch to linux

Ran into the same issue with 0725 and can confirm that you can just click through it like you said.
Maybe one day when Adobe Creative Cloud runs on Linux