by Allan
Some tracks in Re-Volt have fork paths which AI vary in taking left or right directions, as Museum 2.

I made a fork path in Moon Dawn, but there, AI only go to the left...

Does anyone know how to make them vary between the two sides instead of only going to the left every time?

by Gotolei
As far as I understand, the forks in the stock tracks still do have the AI preferring to take one path over the other. However, the preferred path may or may not be easy for AI to get to (eg the inner escalator on muse2 rather than the outer one), so a number of them end up close to the other route instead, which they do just fine with because it's set as a longcut.

I'd guess the rule of thumb for getting a more even split would be to have one path be slightly more difficult to get to, and have the less difficult one be a longcut.

I'm assuming you're trying to tweak the fork in the room with the spinning globe in it? The thing about that room is that there's no large difference to use to split up the AI in such a way. From the looks of it, the node to the left is simply closer to the base of the fork than the one to the right. Even if the car goes off of the platform, it ends up spawning back in facing towards the left because that's the direction it was already trying to go. Playing around with gazzasaicar, it seems the AI refuses to go down the right-side path even when much closer to the right-side node, up until the point where it crosses the wall and exits the node:
► image 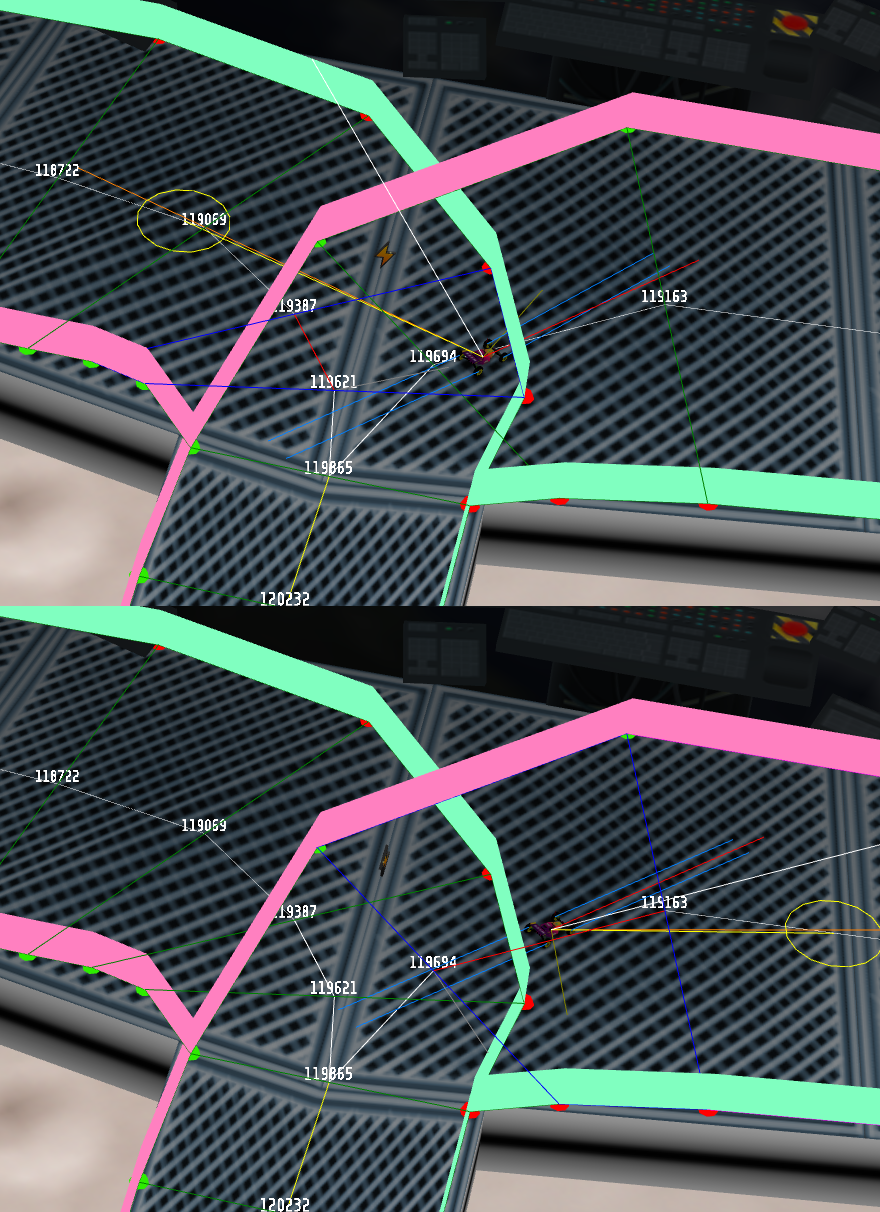 Because the level geometry itself doesn't push the AI towards one side or another, all of the burden is on the nodes instead. Maybe have one side of the fork be the one the AI prefers to use (with its first node closer to the split), but have the node's width narrow down so there's more of a chance of the AI exiting the node?
Also possibly worth noting is the structure of the nodes around the split in muse2. The optimal path has four or five normal nodes, while the alternate path is one long longcut node that covers a wide area (including the normal nodes). The AI seems to switch between the two, even when still within the normal nodes. Not sure if that's because of node types, proximity to racing lines, or a combination of the two, but something along those lines seems to play into it as well.

by Kiwi
Thx for this very useful hints, Gotolei.

I can remember someone said, that the gazzasaicar-AI reacts different, than the "normal" AI? Is this correct?

While playing around with Spa-Volt AI-nodes I recognised, that the gazzasaicar-AI never raced a left path of a fork, but the "normal" AI while a normal singleplayer-race did, with a chance of about 25%.

There is defenitely some difference in AI choices between modes, although I'm not sure what it is exactly, and what modes trigger it. For instance, try letting an AI drive time trail laps with gazzasaicar: it'll always pick shortcuts and ignore longcuts / pickup routes, which is different from the AI in regular races where you drive yourself.

by Allan
Thank you for the tips Gotolei. Gonna try something later.

And yes, that's the section I'm trying to tweak.
All times are UTC
Page 1 of 1
Powered by phpBB® Forum Software © phpBB Limited
https://www.phpbb.com/