I'm currently in the planing phase of my next project, which will be a Re-Volt Total Conversion.
This means, I will try to make a completly new game based on the possibilities Re-Volt/RVGL is offering me.

And this game will be called... 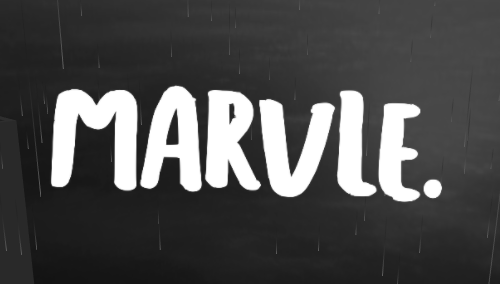 MARVLE will be a Singleplayer Puzzle Game. You are controling a marble, and you have to navigate it through levels and reach the end. And reaching the end will not always be that easy as it sounds!

If you have solved a level, you can try to improve and bring the marble to the finish even faster, until you beat a defined time.

My plan is, to release a first base version of MARVLE including a small set of levels. If people like the game, my idea would be to release new set of levels on an unregular basis. Levels with different styles and different riddles to solve.

By the way: Please don't mix up my game with a second Re-Volt based Marble game, which development began right after I posted first pictures of MARVLE at Discord. The other game will be done by several members of the community, and the project will be lead by Alex. This game will be based on Marbula 1 by Jelle's Marble Runs. I'm really looking forward to this game, which will concentrate more on a Multiplayer part. I'm sure there is place for two Re-Volt marble games. Cause marbles are G R E A T .

I hope I can present you some ingame footage of MARVLE pretty soon. Stay tuned!

Will there be different Marbles to choose from?
Owner of the Durtvan Waiting Room
Top

Yes, there will be different marbles. The marbles will have slightly different size and different materials. So the weight will be different, and they will be handle a little bit different. My plan is that not all levels can be done with all marbles, but I have to fiddle around what is possible with the Re-Volt engine here.

My initial plan was to also use loopings at the track, but someone told me that this will be hard to implement, as the physics in Re-Volt are not made for stuff like that.

As you can see, a lot of stuff is not decided yet. I have to try around a lot, to see what's possible and what not, and then make the best out of it. However, I have defined a main concept, and a idea how the final product should be like.
My Re-Volt World Profile
Top

Great idea, love to see how you create new ideas and build them up. I'm curious how this project will develop.
My Tracks
| My Website
| UrbanX WIP
| Reactor WIP | SpaceShip WIP | RVGL Wildland
Top

I'm so glad you decided to continue this. A focus on time trial and puzzles seems genuinely cool
Top

How many marbles do you think this will have?
Owner of the Durtvan Waiting Room
Top

My current plan is to have different type of marbles, categorized by re-using Re-Volt's car classes. So Rookie will be used as a marble class, Amateur will be another marble class, and so on. The marble types are based on real marble types popular in the last few centuries.

At the moment I have the following:

Class "ALABASTER". Alabaster are "real" marbles, made out of marble. They are also called "Marble Marbles" sometimes. In this class I have planned to put at least the following marbles:
The other types and marbles I also have defined already, but not in that detail. Another class will be GLASSIE for example. Glassies are translucent marbles, made out of glass. For the first I have noted down the marble names Catseye, Onyx, Blizzard, Leaf and Flint for this class. All this marbles are also based on real marbles, but I also will give myself some freedom, and not stay 100% true to the real marble history.

Other classes I've noted down at the moment are CHINA and BOULDER. China marbles are made out of porcelain and was first done in the late 19th century. Boulders are marbles with a 1 inch diameter, so they are twice as big as normal marbles. I have also another very special class planned, which I won't spoil for the first.

All in all I think there will be between 20 and 30 different marbles in the end.

Very cool!
And it sounds like a fun challenge to beat levels with marbles that aren't apparently supposed to be able to beat them.

I've started with working on a test level, to see which possibilities I have and decide how I can go on. 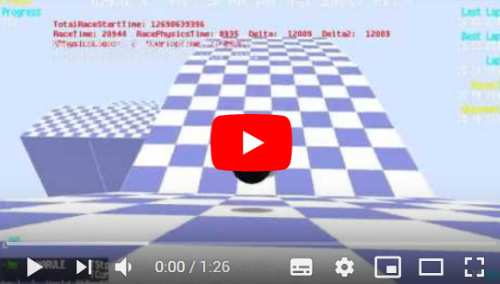 Yes, I took quite a lot of inspiration from the 1980's classic Marble Madness and the 00's game Hamster Ball. But I also will try to bring a lot of my own ideas into the game. At the first levels the inspiration from the games listed above will be pretty big, cause the gameplay will be rather simple at the start, but the more you proceed in the game, the more own stuff I will implement. Including moving opponents, and a lot of custom animations.

Here a short video about the marble movement. You can see that the marvel is in fact a car with invisible wheels.

I've also re-worked the main menu, and implemented new fonts. But it for sure will change during development. 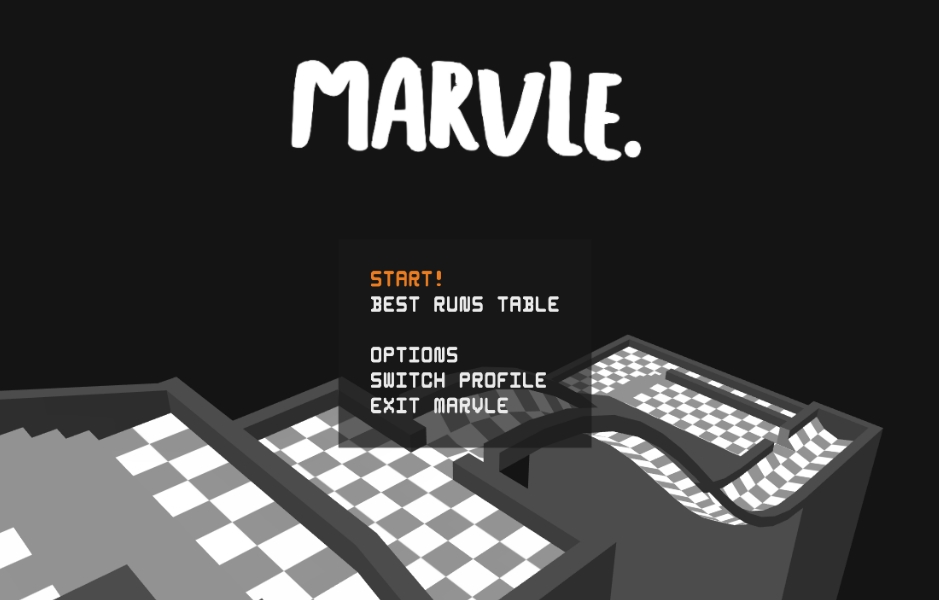 Here a picture of the progess I did today for level 1. Maybe someone recognise this. As a tribute I re-created the beginning of the first Marble Race level, but it's only the first few seconds.

I modeld this from scratch in Blender. It's fun, and I can't wait to continue!

(This is a Re-Volt ingame screenshot) 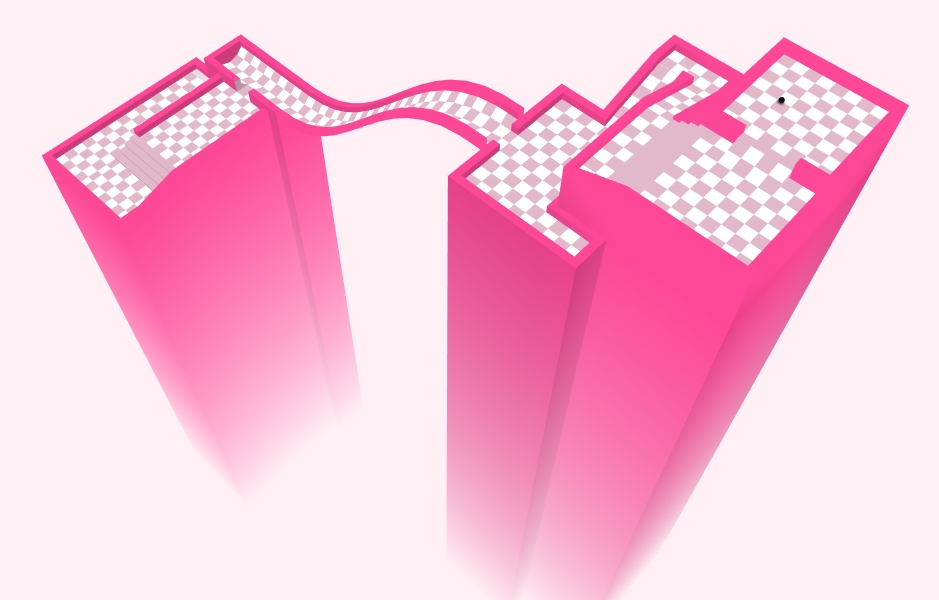 You mentioned that you might make it so that the marbles can only use gravity (and animations) to accelerate, and not use throttle, if this is possible. I wonder if you shouldn't figure this out before you start designing the levels?
Top

Yes, I have to figure this out first. At the moment I try out so many stuff. I just have to get myself a feeling what is possible with the frame Re-Volt/RVGL is offering me, and build the game concept around this. Also, I want to find a visual style which I then can use for the rest of the game. So at the moment my main work is not to design levels already, I just fiddle around with different things - kind of "brainstorming", if you like to name it like this.

However, I make some progress and I am very optimistic for the further progress of the game.

Today I worked on the main menu. Here it is, in action: 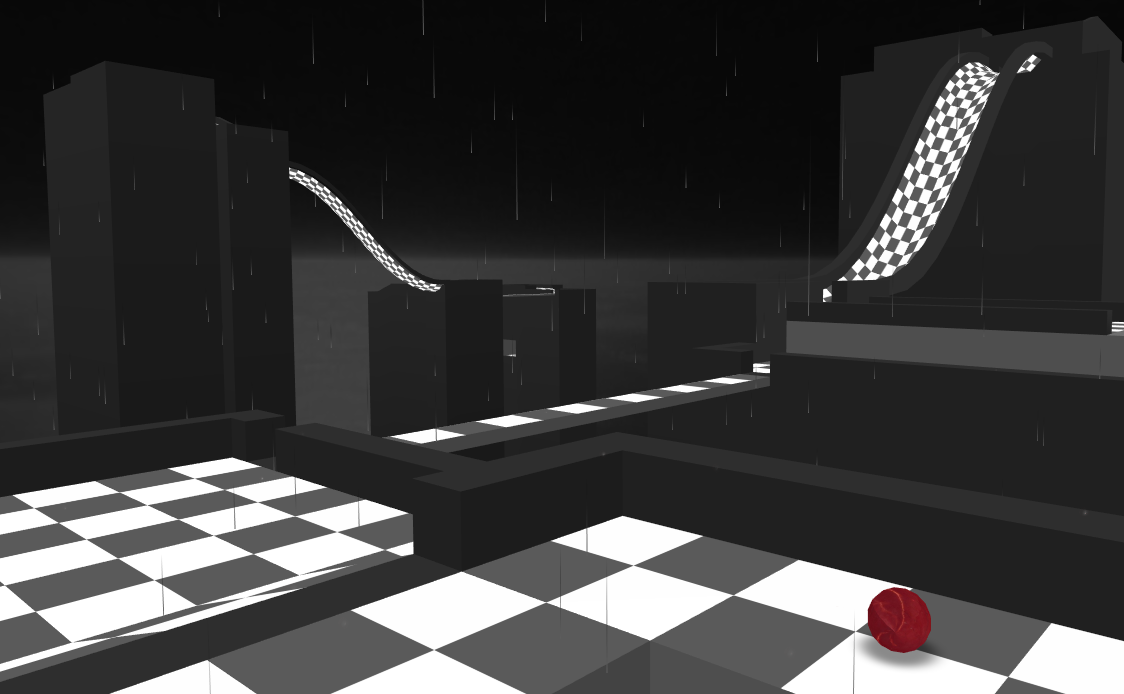 Ah, that makes sense! Yeah, it's probably good to figure out what's possible while experimenting, rather than by theorising about what might be possible.

About the artstyle: I think what you showed in the video looks pretty good, but I hope not the entire game will be so dreary (and probably the first level should be more joyous too

607 wrote: ↑
Mon Apr 20, 2020 7:52 pm
About the artstyle: I think what you showed in the video looks pretty good, but I hope not the entire game will be so dreary (and probably the first level should be more joyous too

The art-style you can see at the moment will not be the only one. Each set of levels will have a slightly different style. Don't expect that there will be "joyous" styles for the other levels. My plan goes more in the other direction for later levels. Everything should have in general an eerie athmosphere, and the later levels will be maybe disturbing and very experimental.

I made improvements to the custom frontend, like adding a rotating skybox, and I also adjusted the marble selection screen. 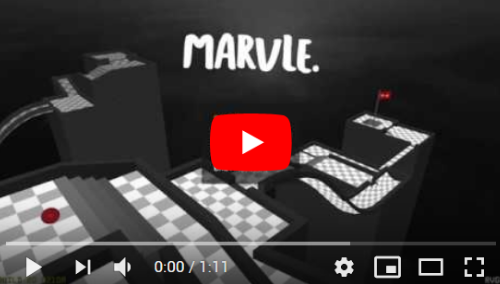 just curious, how would a marble from this, play out in normal re-volt?
Owner of the Durtvan Waiting Room
Top

It would work, but it would be also pretty slow. Slower than a Rookie car.

I made some more progress today. 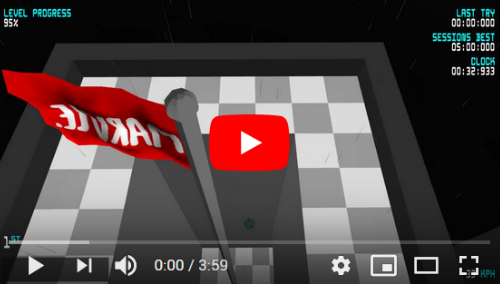 I also prepared the functionality of things like the championship (I call them "challenges" in MARVLE), as well the Training mode (Called "Coin Hunt"), and the Stunt Arena ("Coin Hunt Extreme"). For all this, I would need a adjustment from Huki in the next RVGL update, so I am able to rename the Stock levels. Everything else is tested already, and working as expected.

After I have a solid "frame" now, I will concentrate next on the most importent things: The levels.
My Re-Volt World Profile
Top

I've decide to write a small Launcher for MARVLE.

At the moment you can only activate the DEV mode through it, but other than that it will manage some other stuff, which I need for the Total Conversion later. Also some starting parameters will be set automatically. Guess this is the most handy way for users in the end. This way RVGL will only be executed in the background.

If someone wondered what happened with my MARVLE project: I cancelled the project earlier this year.

But I want to share the files with the community. Maybe someone can use parts of it, or get inspired by it.

Feel free to do anything you want with it. 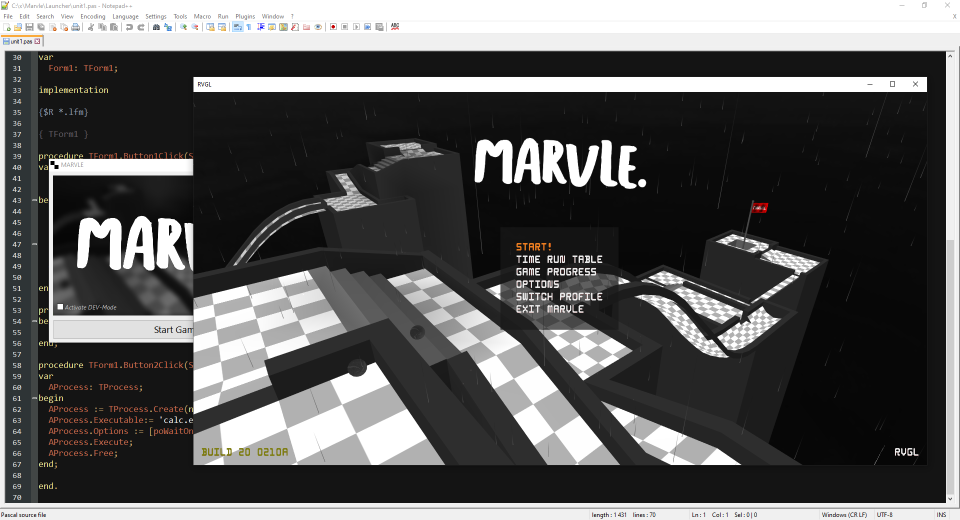 The download includes the whole game and the launcher (+ source code) which I wrote in Lazarus.
The "whole game" is in fact a testlevel, which you can try with a test marble.
The thing where I invested the most time in, was the custom animated frontend and the overall GFX.

I know that this is cancelled, but if were you still working on it, would you add a hidden nod to Re-Volt? Such as a little Re-Volt car in the levels or even a secret marble which is a Re-Volt car?
Top
Post Reply
22 posts • Page 1 of 1