Here are the news!

I have considered some feedbacks and made the following updates:
From today, I will mainly focus on the car editor and physics bug fixing.
And next, I hope I will able to start working on the track editor soon

This is awesome! But I have problems with it

All options i can see in car editor are car parameters and body. I can't make screenshots, rotate the camera etc. What am I doing wrong?

EDIT: Nevermind. I found it

. Screenshot mode is something I've been looking for for years, thank you very much. One more thing. Could you add an option to add a car's shadow to scrennshot? Would be perfect.

And I found a bug. Or rather it's the car's fault. I added one of THESE cars. When I load the car it look like this: 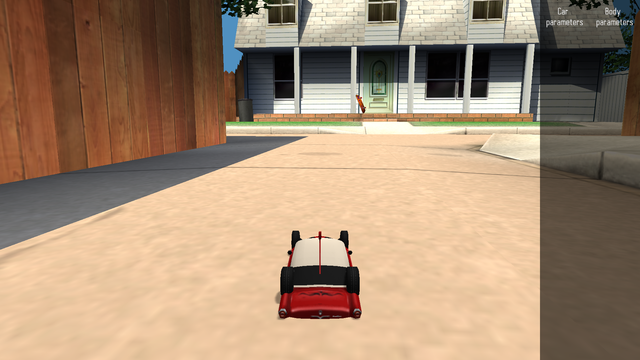 Do you know what might be the problem?
Top

Regarding that this is programmed partly in C#, this could very well be a <code>CultureInfo ^1</code> thing.

I recommend @Steb to look at the comma's and dots in parameters.txt that could cause this error on specific computers (maybe US rather than European systems). For the best result I recommend to use `CultureInfo.InvariantCulture`

@Konrad
Yes, I will try to include it, maybe with an option to toggle it.
I will investigate on this curious bug, you provided the car you used so it will help a lot, thanks

@r6te
Well seen, it could be linked to that. I made a method to parse floats with the invariant culture but maybe I forgot to call it somewhere. I will check the code

Thanks for your feedback !
Top

I see you updated files

Any update on this project?
Top

Are you still working on this huge project? I find it fascinating. Kudos to you for doing this all on your own (though I admit that a closer collaboration with the developers of Re-Volt could be beneficial for both sides

Are you porting this to the Godot engine or to the Unreal engine?
There is a similar project of porting from another engine (fife) to Godot, in case you or others are interested:
Unknown Horizons, Godot port - https://github.com/unknown-horizons/godot-port

I had never anticipated that such a fast game as Re-Volt or Open-Volt as engine/sandbox could be realised with Godot, but I am at the very beginning to grasp what this all means (and willing to learn

Keep up your good spirits, and I wish you much success!

This would be very sad. I do not see a competition between his project and Re-Volt. In fact, a closer collaboration could have been beneficial for all. Is there anything that could be used by the Re-Volt developers and community? Even if it's just ideas and inspiration.
Top

Thank you for the interest you give to Open-Volt!

I'm still working on the project, but way less than several months ago.
From the last time I've given an update about it, I've focused on technical stuff, and didn't give visibility about it because I think it's not the most interesting thing to let people read there.

I've dropped using Unity engine, Godot is now used instead. And the fact Open-Volt is engine-less just made things a lot easier to do as the port has been done in one week.
Here are two comparative screenshots of the 2 game engines: 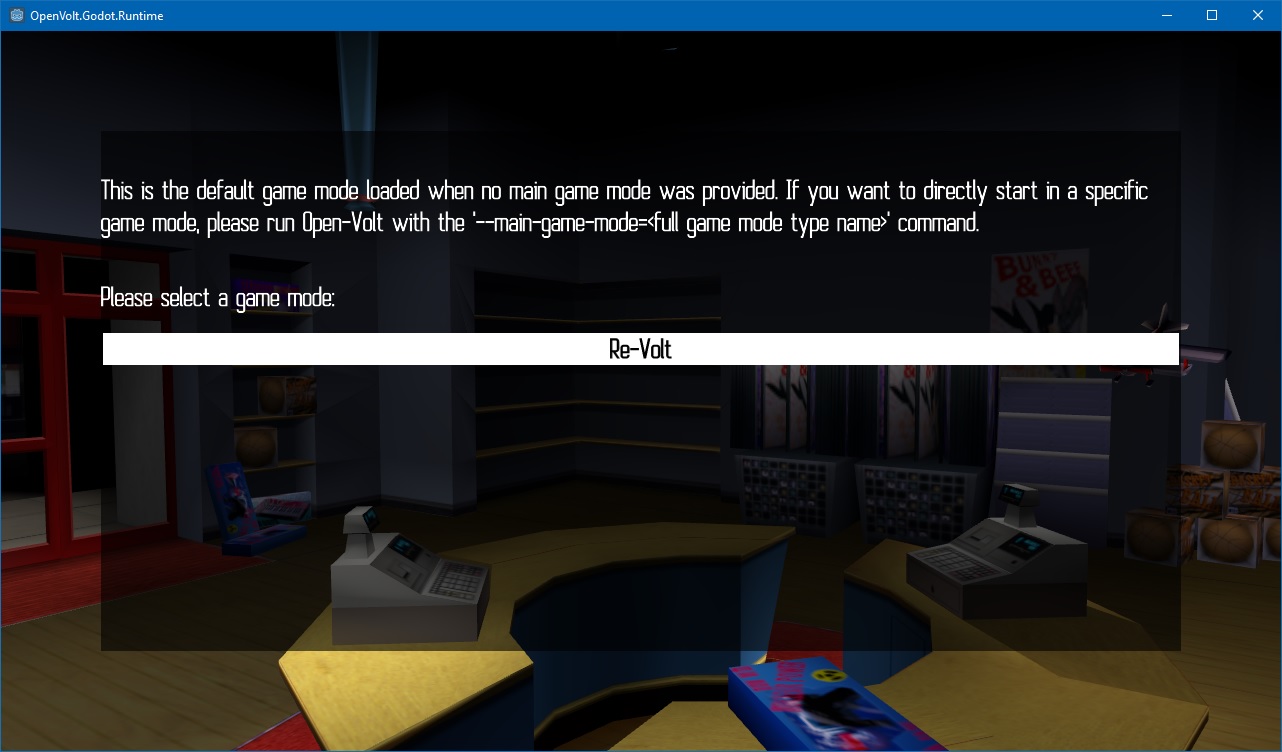 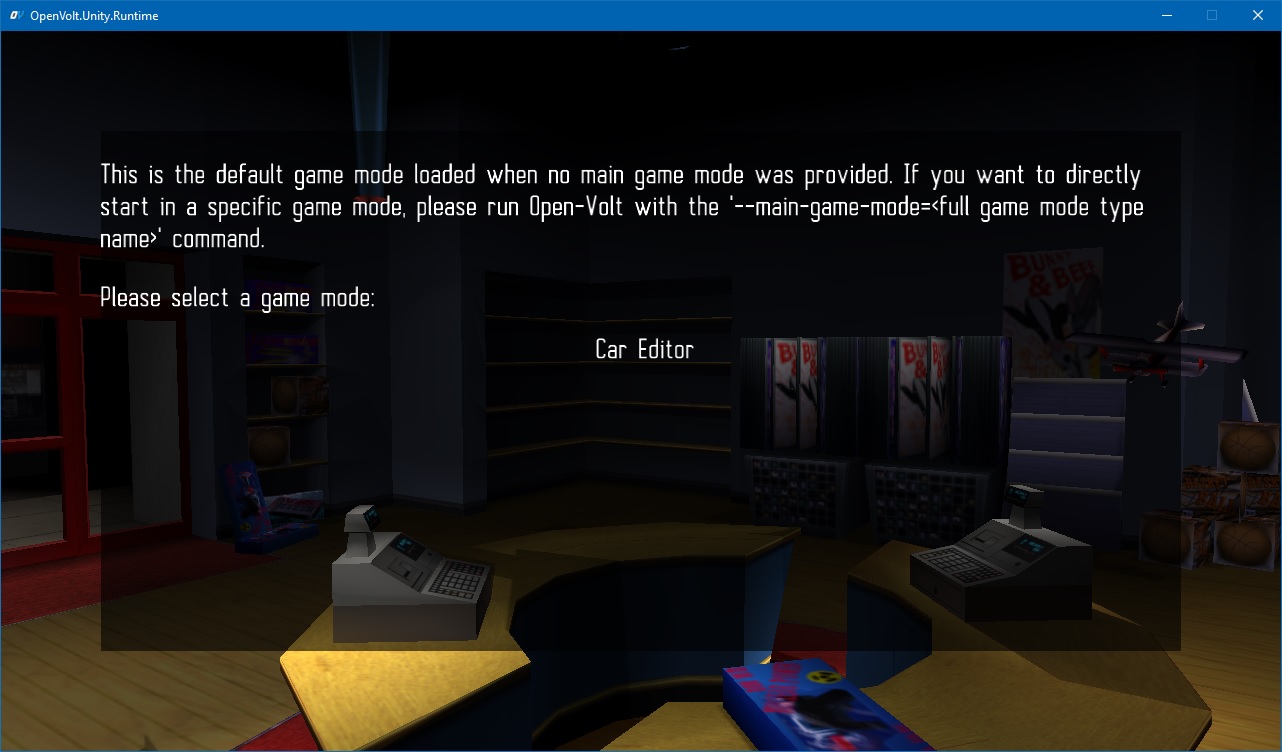 I definitely love using Godot engine, way more than Unity, because the API is cleaner and more permissive, exactly what was needed for the project.
Godot is still a young game engine and not perfect though, I've hit my head against a lot of walls, but I look forward for the 4.0 that looks very promising, that's why I'm not involved on Open-Volt as much as at the beginning.

Btw, I was planning to create an entry on itch.io, and write some true devlogs to show the project is not dead. This kind of website is, in my opinion, more suited for the current state of Open-Volt. By this, I mean, Open-Volt is somewhere between the proof of concept and the alpha stage, so, expect more heavy block of texts about the progress than releases. That's why itch.io is well-suited for that purpose.

My philosophy about the development of the project is, as long as I don't have a solid code base and I don't feel comfortable using the SDK myself, I won't focus on gameplay features. The golden milestone that needs to be reached is this easy-to-use SDK. Once done, this will give a true boost to the project, and a lot more interesting stuff to show.

About a possible collaboration, this idea has already came to my mind. Though not impossible, it would be subject to a deep reflection, as RVGL and Open-Volt don't use the same technologies, which is, in my opinion, the main barrier. This doesn't mean this barrier could not be broken, but, let's be honest, it won't be easy. Another question is how to make Open-Volt and RVGL intereact? One uses the legacy code, the other was started from scratch, the model is different. Directly hooking some components of Open-Volt would be challenging. However, what comes to my mind that is possible is to use Open-Volt as a dedicated server for RVGL, as long as a data contract is set up. But I guess the dedicated server is already in the roadmap of the RVGL team and will do a way better job than an external tool.

Hope this post helped to give some visiblity and have answered to most of your questions.

Anyway, thank you so much for your support

Hi Steb, thank you so much for your thoughtful reply. I am indeed happy that you switched to Godot, as I have begun first steps of understanding this engine myself (not for development of an own project, but as I am simply interested in it).

There is another project of porting Unknown Horizons from the effengine to Godot (also at GitHub, with lots of discussions at Discord). From following this (not actively contributing) I can at least understand how complex it is when starting from scratch.

I wish you much success and fun with your project. If I can (I am really just a noob), I will be happy to help.

You all, take care and stay healthy.
Top

Any update on this project? Are you still working on it?
Top

I assume that this project died, which is not surprising for a "one man show" with such a large project. A pity, as it looked promising. Hopefully, Steb is well (I mean it).
Top

Not dead yet, I still work on it time to time, with a slowed down rhythm for sure.
The mistake I've made is introducing the project way too early I guess.
I just take my time, do as many refactoring as needed to increase development comfort and maintainability.
As I've stated before, I aim to do a solid code base, not a complete rushed mess.
What I've said in my previous reply is still true today.
I don't have time imperative, it's just a project I do during my free time, for the love of programming, of learning new things, progressively discovering where it leads to. That's the spirit of this project

Thank you, dear Steb, for your update here. And I do sincerely hope you do not feel offended by my post. If you do, please accept apologies.

I fully understand that everybody doing these freetime things does not want to get rushed by impatient people like me. I will hold my fingers still now (in this thread

) and wish you all the best!

I'm really glad you're still working on it

. Take as much time as you need