The idea of a launcher has been in my mind for quite some time now, and I've decided to create one! The main feature is the fact that you can launch with select IO classes. Other cool things included:
- launch with cli options
- custom list of folder names for launching
- rename track folders
- fix cases straight from the launcher! (my own interpretation - fixes cases only in cars and levels folders) 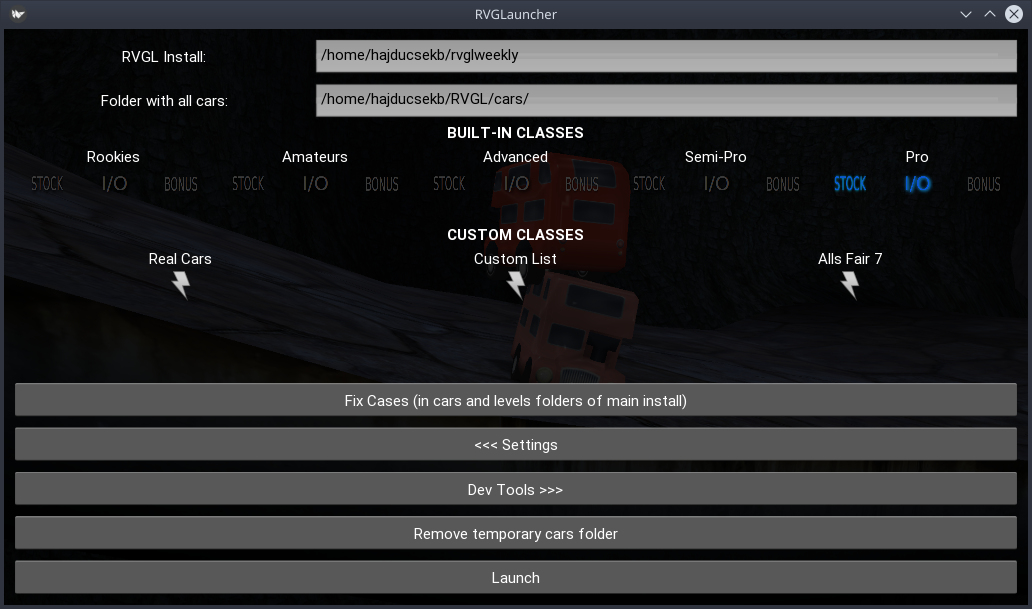 Installation shouldn't be too complicated: you need python3 (usually in package manager) and kivy - Debian based:

Then you can just download the source code as a zip, and launch it using python3 rvglauncher.py. The other option is using git:

and you can run it the same way as the other method:

Important: You should create a new install where you remove the cars folder. This is the install you should put in the RVGL Install field. In the "Folder with all cars" field, you need to put a folder where you have your cars. This can be from the main install. Now you just need to select which classes you want to race (click stock/IO under the selected rating, bonus doesn't work for now), and you'll see them as blue if they're selected. Launch the game, and a cars folder will be created in your new install. This will include the cars based on the ratings you've selected. It uses bash based symlinking, so it won't take too much time, nor will it use up too much space. After a session, you can delete that cars folder with the "Remove temporary cars folder" button.

If you'd like to use the launcher to play on your main install and fix cases there, you can do that as well. However, if you use your main install in "RVGL Install" field, you should not press the remove temporary cars folder button, as it will remove your cars folder. This does bring up a warning message, but for now, this app is WIP. You should rather use use a dummy install.

There is also 1 dev tool for now, which is the ability to rename track folders. The app will look for the said folder in your [dev install]/levels/ folder, and it will rename the track there. E. g. if I want to rename hotelretro to retrohotel, and the track is located at /home/hajducsekb/RVGL/levels/hotelretro, then I set my dev install to /home/hajducsekb/RVGL/ and the bottom fields look like this:
From: hotelretro To: retrohotel

Known issues:
- The stock/IO/Bonus images can unload for some reason - will contact kivy support regarding this Update: Fixed using a Kivy Atlas file instead of seperate images! (2020/02/14 00:20 UTC)

I hope you all have fun with the app, hopefully more features will be coming!