In the recent months, as well as in the upcoming updates quite a big number of special launch commands were added to the game (written like -this after the game executive), some special features/options that were added are changeable only through the modification of the profiles.ini file or rvgl.ini file or nickname.ini file in the game folder (like the LAST LAP popup, GL threaded, random skins, AI difficulty, rubberbanding, animate rear view), as well as some features were added or can be added and are switchable though a certain key binding (like RVGL screenshot which has a predefined key binding).

There is really so many of them that even old players have lost track of it, there is no list or such to know them all, so what I suggest is:

1. Make a special category in the game options in the frontend which would be called as "Special Settings" or "Advanced Settings", in which things that can be switched ON and OFF while the game is running could be switched ON and OFF through this Special Settings menu, like certain -launch commands (I suspect that some of them will have to stay as launch commands like -dev or -folderpath because they can't work otherwise, but for those that can be like -autoreplay or such it could be a nice feature) and all advanced settings that can be changed through certain .ini folders, like LAST LAP popup, GL Threaded, Random skins, AI difficulty and all other that could be changed in-game and can be put in such special menu option.

2. Expand the current keyboard configuration possibility settings with the things that have an actual key bindings, like the screenshot shortcut, perhaps also spectate/kick/mute player in multiplayer races for a host (if RVGL would catch double button key bindings) and some other things that I do know about and also those key-dependant features that can be added in the future.

3. Maybe do a list of special changeable options and key bindings possible for players to modify and use, so that it would be clear and organized and easier to find and use?
Top

Personally I never had issues with configuring this kind of things via ini-files or start-parameters. But especially for newbees it's very hard, and I guess a lot of people don't even know that there are all this possibilities available. So I definitly support point 1 and 2.

A complete list of available options is in the online docs:
Top

Okay so there is a list, it could be linked sonewhere on .io or something of that kind for easier and wider access.
Top

The documentation is currently available in the Support section. 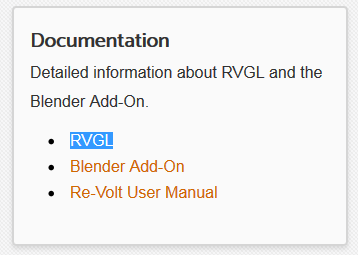 If you can think of a better place, I'm open to suggestions.
Top

Are there any reason, why those kind of additional options won't be added to the in-game menus? Maybe a technical one? Somehow I don't understand why some of the options are available, and some are not. At the current state (also with a well written documentation) it is not so user-friendly.
My Re-Volt creations: Skins | Cars | Tracks | Marvle
Top