by Gotolei
While the modern editor controls are a huge step up from what we had before, it's still been irking me somewhat that precise movements, rotations etc are nearly impossible to do (or even less so than before, as with old mig you could rotate snap to 90° increments). 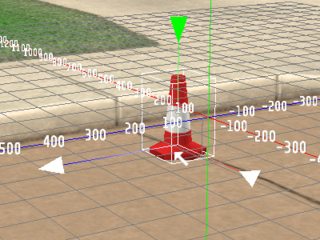 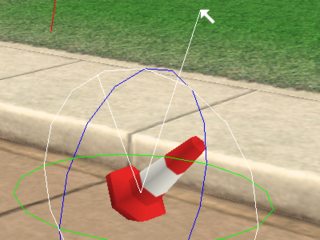 One thing that would help out quite a bit would be some sort of numeric feedback: position +/- relative to existing position, rotation angle change, etc.

Adding on to that, an option for some degree of snapping would be nice, at least for rotation. Maybe 11.25° increments? Personally I feel like the endgame would be something like blender's typing interface, where typing in eg. RX90 tells it "Rotate around X, 90 degrees" or GY-200 is "Grab (move) along Y, -200 units" but optional incremental snapping would probably do well enough as a stopgap. It might also be neat to have a "snap to mesh" option, like what ai/pos nodes currently do.

by javildesign
I don't know if the following method is what you are searching for, but when I want to place an object exact how I want it, I use Jigebren's plugin for Blender 2.73.

There are some flaws, like the custom animation object which are 'unknown' and thus unusable, but there is a method to go around that. Add an empty or replacement object with Blender in to you scene, set it on location and give it rotation to your liking.
Add value of a basketball, or other. Export out .fob, go in to makeitgood and change it to any model you want, save.

by Gotolei
Sure, but that's kind of a one-way street unfortunately. I actually used that exact method to place the animations in the nhood2 "mod" I did, but once it's been changed to an animation then (iirc) the object in the fob will just fail to re-import to jig's plugin altogether. That and I don't recall which tracks exactly, but some fobs that predate custom animations fail to import for nebulous reasons as well.

by javildesign
Yeah I understand. I agree that it would be handy to have those options in the makeitgood mode.

I think you may already know, but just for the information;
Before I import the .fob back in to Blender, I change the objects that are object animations to a temporary known object. It's not very clean workflow but it works well to re-import them.

My python knowledge is not that great, but to add the custom animations as an option shouldn't be a big change in the script I assume. But again, I agree that ingame option to change the exact location and rotation ect with numeric value's, would be very welcome!
All times are UTC
Page 1 of 1
Powered by phpBB® Forum Software © phpBB Limited
https://www.phpbb.com/